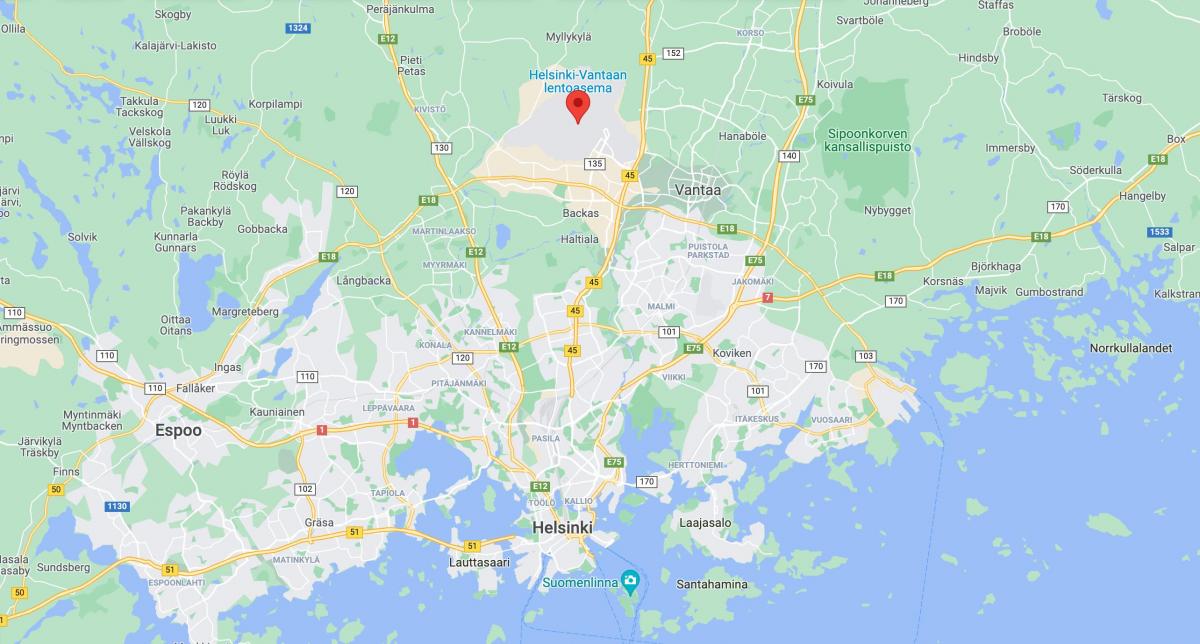 Air traffic is handled primarily from the international Helsinki Airport, located approximately 19 kilometres (12 mi) north of Helsinki downtown area, in the neighbouring city of Vantaa as you can see in Helsinki airports map. Helsinki second airport, Malmi Airport, is mainly used for general and private aviation. Helicopter flights to Tallinn are available from Hernesaari Heliport. Helsinki-Malmi Airport (Finnish: Helsinki-Malmin lentoasema, Swedish: Helsingfors-Malm flygplats) (IATA: HEM, ICAO: EFHF) is an airport in the city of Helsinki, Finland, located in the district of Malmi, 5.4 NM (10.0 km; 6.2 mi) north north-east of the city centre. Until the opening of the Helsinki-Vantaa Airport in 1952 it was the main airport of Helsinki and all Finland. Today, the airport is still actively used in general aviation and flight training. It still is the second busiest airport in Finland after Helsinki-Vantaa Airport, as measured by the number of landings. For a long time, the City of Helsinki has had plans to close the airport in order to use the area for construction of new residential zones. However, the closure of the airport has been a very controversial issue and its future remains unclear.

The first land airport of Helsinki, located in Tattarisuo in the township of Malmi, became operational in December 1936. The area is nowadays in the district of Malmi in Helsinki. The airplanes of Aero Ltd (nowadays Finnair) were converted from floatplanes to land-based aircraft without delay and moved to the new Airport along with general aviation aircraft. The functionalist terminal building was completed in 1938 and designed by architects Dag Englund and Vera Rosendahl. The official opening ceremony took place on 15 May 1938 as its mentioned in Helsinki airports map. Helsinki-Malmi Airport was among the first in the world to be designed from the beginning as an international airport.

There are several outlets in Helsinki airport where air travelers can enjoy refreshments in cafes, bars and restaurants, serving local as well as international cuisine. For passengers in a hurry there are take-away breakfast or lunch packs that can be consumed on board the plane. Cafes and bars open very early in the morning and remain open for business until late at night. Some cafes remain open, offering a 24-hour service. Helsinki Airport shops offer extended opening hours from 5.30 am to 20.30 pm in the general terminal areas, while the shops within the departure lounges, namely outlets located beyond the security area and passport control, remain open from early in the morning until 23.00 pm at night as its mentioned in Helsinki airports map. There are outlets like Capi Electronis for gifts or famous fashion and accessories brands like Mulberry or Tie Rack. Everyday necessities can be purchased at Grocery Store Alepa, while presents for little ones at home can be found at Santa’s Gift & Toy Store – Finland is after all Santa official country of residence. 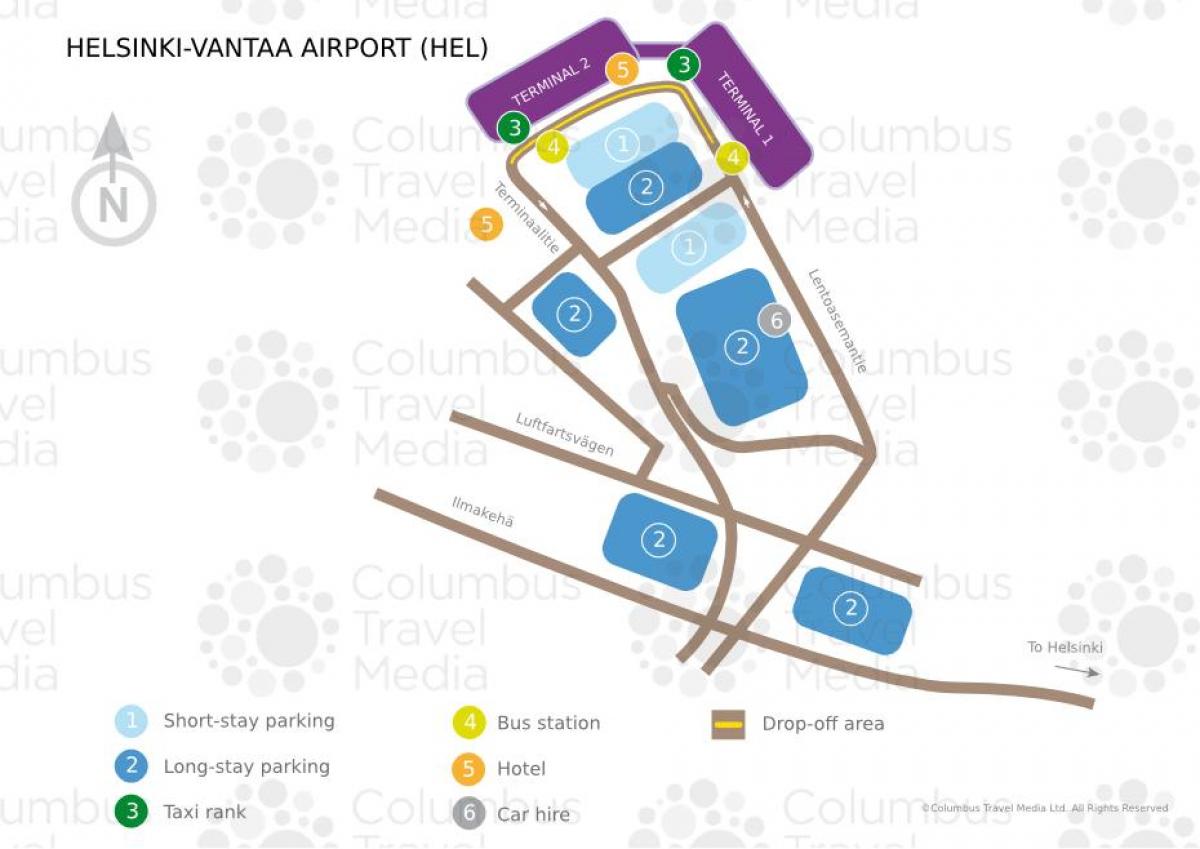 Helsinki Airport or Helsinki-Vantaa Airport ( IATA: HEL, ICAO : EFHK ) ( Finnish : Helsinki-Vantaan lentoasema, Swedish : Helsingfors-Vanda flygplats ) is the main international airport of the Helsinki metropolitan region and the whole of Finland. It is located in Vantaa , Finland , about 5 kilometers (3 mi) west of Tikkurila, the center of Vantaa, and 9.2 NM (17.0 km; 10.6 mi) north of Helsinki city ​​center as you can see in Helsinki international airport map. Originally built for the 1952 Summer Olympics in Helsinki, the airport served 14,865,871 passengers in 2011 and it is the fourth largest airport in the Nordic countries. Its employees 20,000 employees and there are 1,500 companies who operate from this airport. The airport is operated by Finavia , the state-owned enterprise that operates Finland airports. Helsinki Airport was chosen as the best airport in the world in the IATA 1999 survey on the topic. In 2006 the global airport customer satisfaction survey AETRA ranked Helsinki Airport one of the best airports worldwide and according to Association of European Airlines 2005 delay rates, Helsinki Airport was the most punctual airport in Europe.

Helsinki international airport three runways provide a platform for future growth while the airport can accommodate extra-wide aircraft such as the Airbus A340 and Airbus A350, the former already in service and the latter being scheduled to enter service at Helsinki Airport with Finnair in the coming decade. The airport is the international and domestic hub for Finnair, the Finnish flag carrier. It is also the hub for Blue1, the Finnish regional division of SAS as its shown in Helsinki international airport map. Low cost carrier Norwegian Air Shuttle, Leisure-flight operator Air Finland and Flybe Nordicare based at Helsinki Airport as well. The use of three runways allows for efficient clearing away of snow and ice during the winter months to keep the airport open. The Aviapolis is a new international business park adjacent to the Helsinki airport area, already hosting the operations of numerous companies around the airport. Several hotels are located near the airport as well. Construction of a train link, Kehärata , to the center of Helsinki began in the spring of 2009 and the line is planned to go into operation in 2014. The Finnish Aviation Museum is located near the airport.

Helsinki international airport is nominally divided into 2 terminals, located 250 meters (820 ft) apart and linked by an internal pedestrian connection both airside and landside as its mentioned in Helsinki international airport map. In practice, however, the airside parts of the terminal buildings are not divided into terminal 1 (the former domestic terminal) and terminal 2 (the former international terminal) but to Schengen and non-Schengen areas. The non-Schengen area of ​​terminal 2 has been enlarged in 2009, enabling the airport to receive eight wide-body aircraft at the same time, compared to the current five wide-body gates (of which only two are suitable for Finnair Airbus A340 ). Simultaneously, the passenger capacity of the airport rise to some 16 million passengers per year. Finnair head office is located in Tietotie 11 on the grounds of Helsinki Airport. The company moved the head office there from central Helsinki in 1994. The company held a "house-warming" ceremony on 11 January 1994. The head office of Finavia , the company that manages Finland airports, is located on the grounds of the airport. Other airlines with head offices on the grounds of the airport include Air Finland and Blue1.