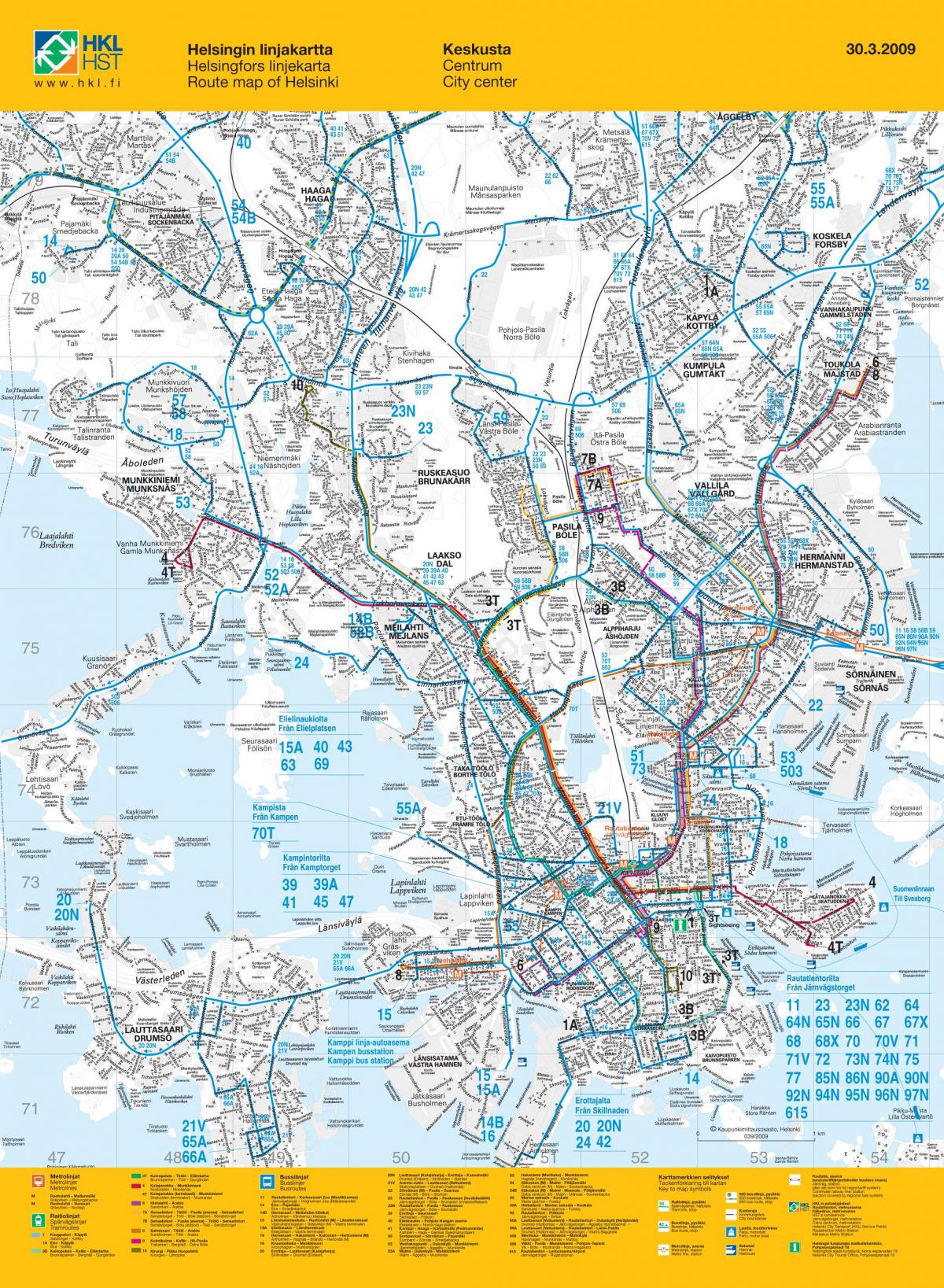 Internal bus routes of Helsinki (Helsingin sisäiset linjat) can be found almost anywhere in Helsinki. For some parts of the city these buses provide the backbone of the public transportation system. The routes are drawn and the timetables set by HKL, but operated by independent companies as its mentioned in Helsinki bus map. HKL holds a competition for each route or a set of routes, and the company offering to operate the route for the best quality-price ratio will get the contract. The quality is measured with a pointing system which gives points for such aspects as the quietness and size of the buses that would be used. Many of the buses operate as a feeder lines for the Helsinki Metro or VR commuter rail. This is especially true for eastern Helsinki. Nearly all other routes have the other end of the line in the downtown near the Helsinki Central railway station.

Helsinki bus line numbers for the internal lines contain two digits and for some a letter. Most lines are operated between 5:30 and 23:45, the most popular between 5:30 and 1:30 as you can see in Helsinki bus map. Nighttime lines which operate only from 23:45 to 1:30 (and sometimes early morning) are signified by letter N. Lines 01N-09N operate from 2:00 to 5:00 but only on Friday-Saturday and Saturday-Sunday nights. The line numbers are composed of three digits and occasionally a letter accompanying them, which means a different route than the normal route. Buses 615, 617, 415 (N), 561 and 562N operate to and from Helsinki Airport, and you can catch a bus from Helsinki Airport to many parts of the metropolitan area. Many long-distance buses also stop at the airport.

The regional bus lines of Helsinki are managed by YTV in similar manner to the management of the internal lines by HKL. The regional lines have been designed for moving people between important points in the metropolitan area or for the sole purpose of getting to downtown Helsinki as its shown in Helsinki bus map. These lines tend to use the fastest possible way to get out of Helsinki, usually through motorways. They have also quite often newer buses than in HKL routes and more empty seats. Most regional lines that come to downtown end either on Rautatientori (from eastern Vantaa) and Elielinaukio (from western Vantaa and northern Espoo) next to the Central Railway Station or in the Kampin Keskus, a modern bus terminal (from southern Espoo). The operating hours for the regional lines are similar to those of the internal lines, but the departures are not as frequent as the city lines.