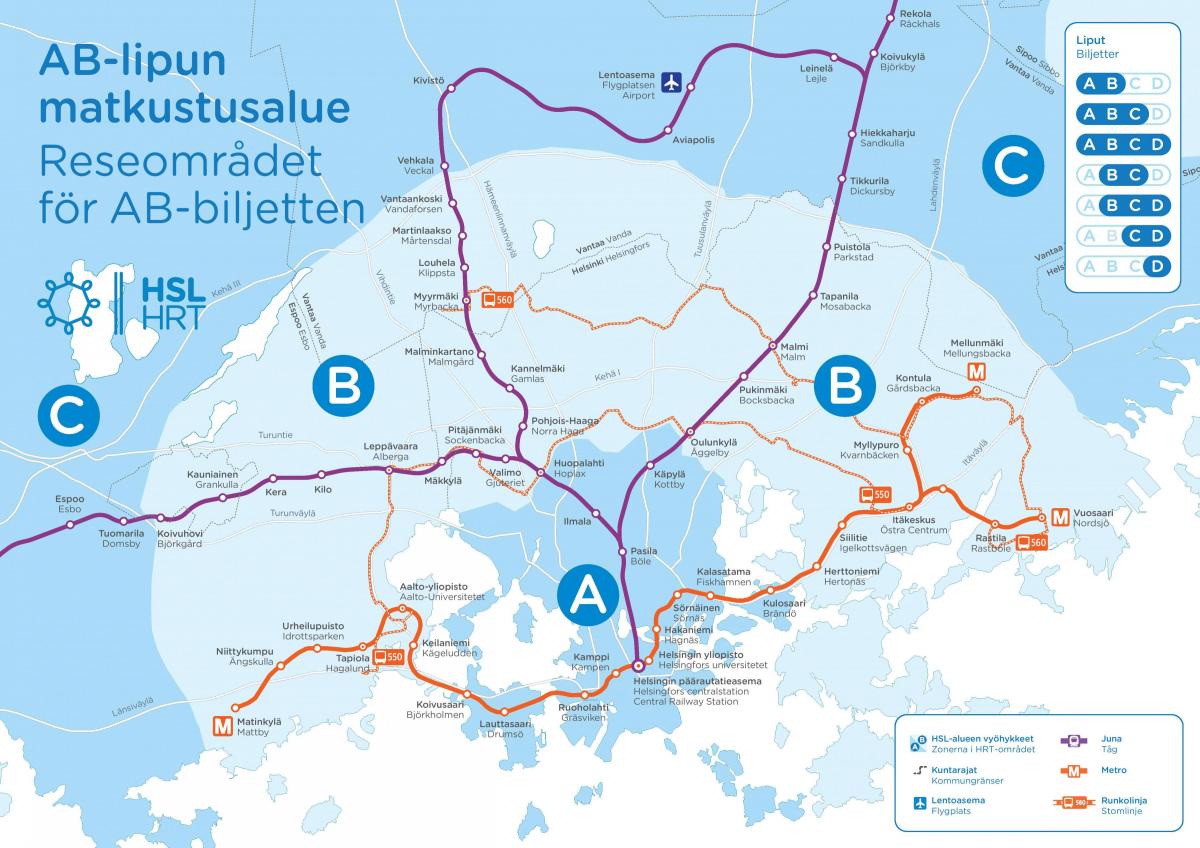 Helsinki metro is operated by Helsinki City Transport (HKL) for Helsinki Regional Transport Authority (HSL) and carries 50 million passengers per year. The system contains a single forked line with seventeen stations along a total length of 21.1 kilometres (13.1 mi) as you can see in Metro map Helsinki. It primarily serves the tightly built suburbs of East Helsinki, but can also be used as a means of transport within the central parts of the city. The Länsimetro extension will continue the line into western Helsinki and the southern parts of the neighbouring city of Espoo, currently served by buses only. The local commuter rail network (overground) that serves north and northwest directions does not intersect with the metro network, but passengers can change trains at the Helsinki Central Railway Station (Metro station Rautatientori).

The Helsinki Metro system currently consists of seventeen stations as its shown in Metro map Helsinki. The stations are located along a Y shape, where the central line runs from the city centre towards the eastern suburbs. The line forks at the Itäkeskus metro station. The six stations in central Helsinki are below surface, while the eleven eastern stations are surface stations. Trains on the metro system usually run every four or five minutes, and they alternate between the Mellunmäki (northern) and Vuosaari (eastern) branches. The metro trains stop at every station, and the names of the stations are announced in both Finnish and Swedish (with the exceptions of Central Railway Station, which is announced also in English, and "Kaisaniemi", which is pronounced identically in Finnish and Swedish). The metro is designed as a core transport facility, which means that extensive feeder bus transport links are provided between the stations and the surrounding districts.

The ticketing scheme on the Metro is consistent with other forms of transport inside the city of Helsinki, managed by the Helsinki Regional Transport Authority (HSL) agency as its mentioned in Metro map Helsinki. The HSL travel card (matkakortti) is the most commonly used ticket, which can be paid either per journey or for a period of two weeks to one year. Currently, the metro lies entirely within the Helsinki zone. Single tickets can be bought from ticket machines at the stations or by SMS. A single ticket can be used to change for any other form of transport inside Helsinki city, and is valid for one hour. Regional tickets are likewise valid. There are no gates to the platforms, and a proof-of-payment system is in place. The electricity used by the metro trains is a 750 volt direct current, and it is drawn from an electricity track (also known as third rail) on the side of the metro tracks. 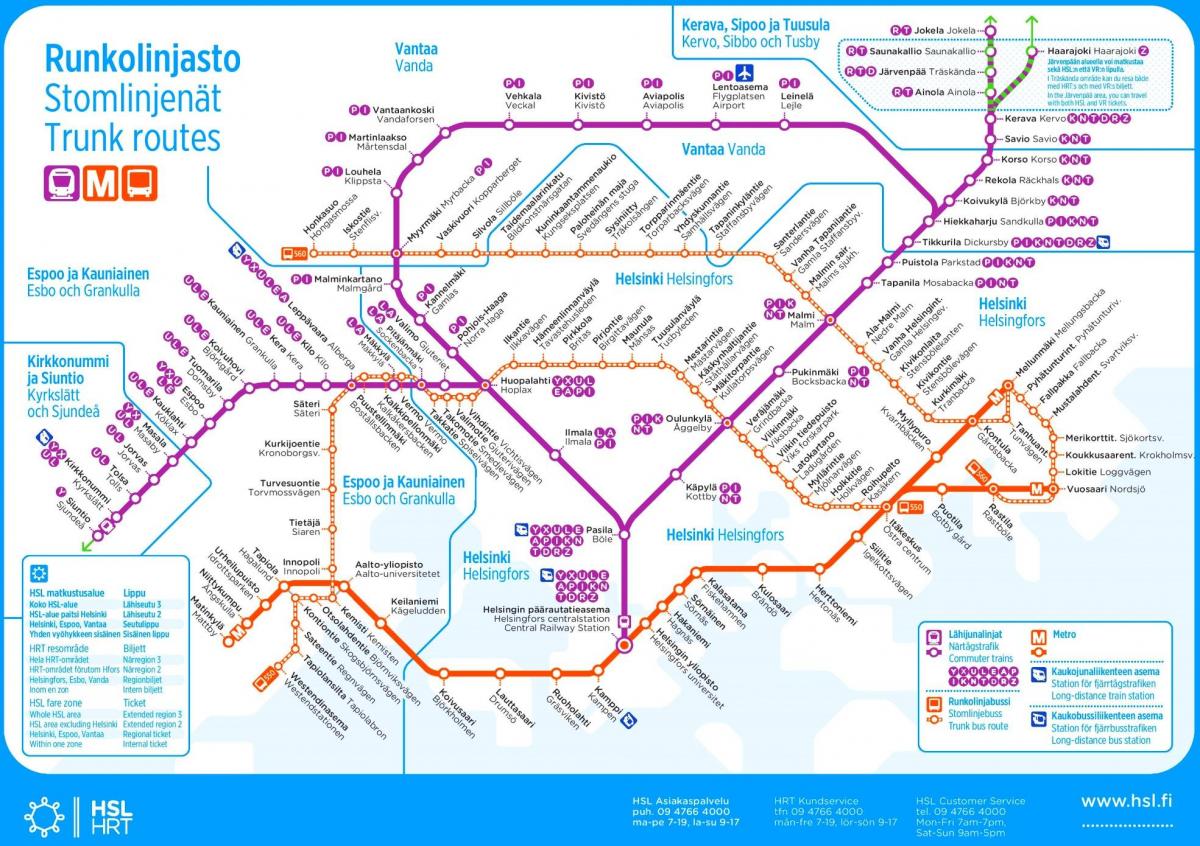 According to the Helsinki City Transport (HKL) yearly report for 2003, the subway system had a total of 55.4 million passengers, who travelled a total of 404.1 million kilometres as you can see in Helsinki subway map. The total turnover for the subway division of HKL was €16.9 million and it made a profit of €3.8 million. The Metro is by far the cheapest form of transport in Helsinki to operate, with a cost of only €0.032 per passenger kilometre. The same figure for the second cheapest form - trams - was €0.211. In 2002, the subway used 39.8 GWh of electricity, though the figure was rising (from 32.2 GWh in 2001). This equals 0.10 kWh per passenger kilometre, and compares favourably with Helsinki trams (which used 0.19 kWh per passenger kilometre in 2002).

The Helsinki subway has one line and 17 stations along a 21 km route as its shown in Helsinki subway map. Normal operating hours are from 5 a.m. to 11 p.m. Single fare tickets go for 2.90 euro. Bikes and pets are allowed. You can travel from the airport to the city centre by subway. Construction of the subway system began in 1969, but it was not until 1982 that the opening was announced. During that time, the contractor implemented different pilot tests with several trains, taking into consideration the weather and low temperatures that Helsinki has most of the year. At the beginning, the trains only served the eastern part of the city, but service was gradually expanded towards the city centre. The western side of the city is expected to be covered shortly.

At present day, there are 21.1 km of subway service lines distributed between 17 stations along a single line as its mentioned in Helsinki subway map. The system mobilizes more than 200,000 people each day, so it has become a key element to public transport within the city. The Helsinki subway has only one line, although preliminary work on the second line is starting, and expansion of the current one is already underway. It has three terminal stations, one in the city centre and two on the eastern side of the city. The line branches out into two different paths at Itäkeskus station. Mellunmäki station, at the northeast end of the line, has the peculiar distinction of being the northernmost metro terminal in the world. It serves a residential zone where commerce is scarce, but demand is rather high on work days.