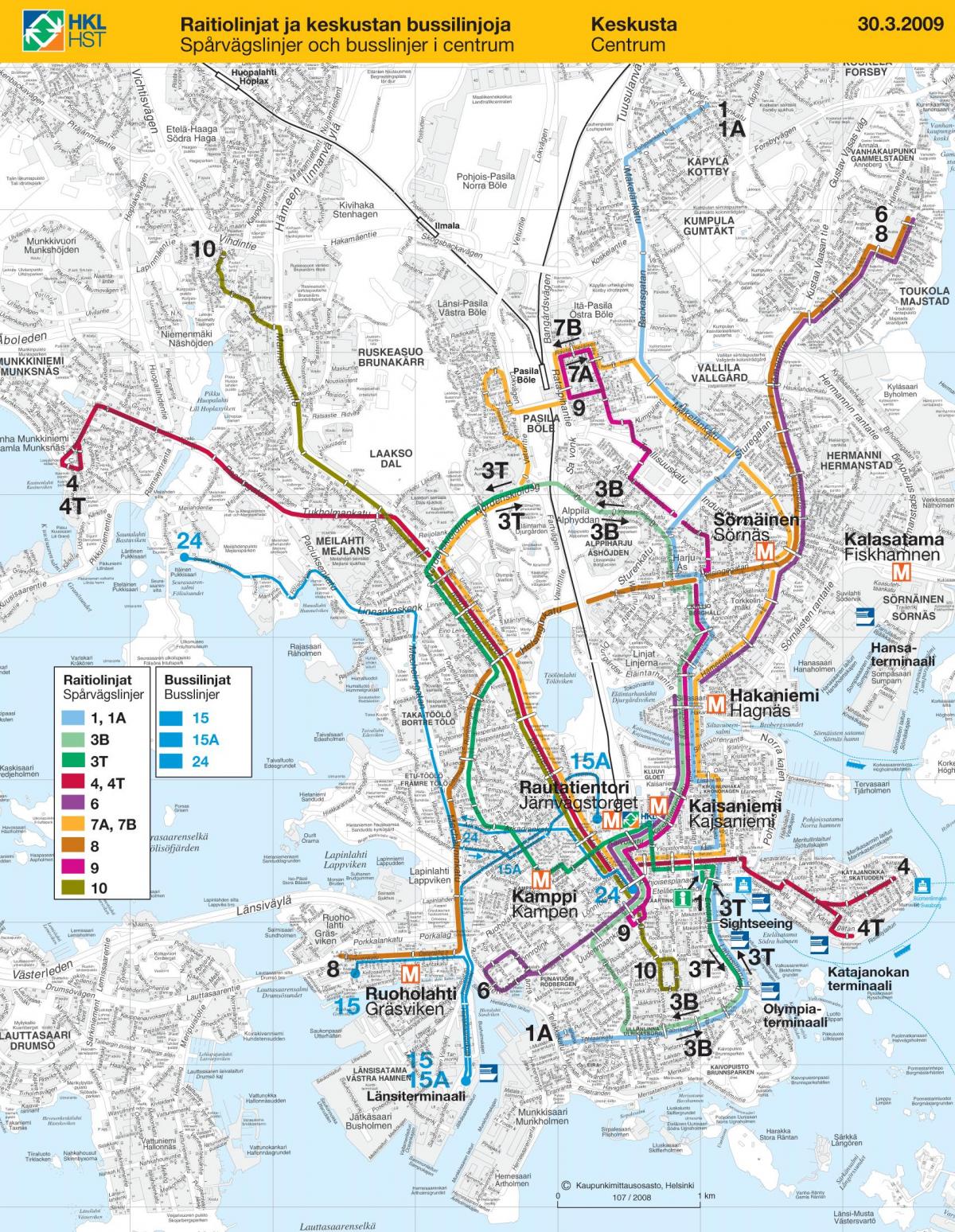 Public transport in Helsinki consists of bus, tram, metro, train, and ferry services as you can see in Helsinki transports map. The system is managed by Helsinki City Transport (HKL) for the lines that remain in Helsinki and by Helsinki Metropolitan Area Council (YTV) for the routes running in several municipalities, mostly including the surrounding municipalities of Espoo, Vantaa and Kauniainen. Helsinki diverse public transport system consists of trams, light commuter rail, the subway, bus lines and two ferry lines. The Helsinki Metropolitan Area Council manages traffic to neighbouring municipalities. Today, Helsinki is the only city in Finland to have trams or subway trains. There used to be two other cities in Finland with trams: Turku and Viipuri (Vyborg). However, Turku abandoned trams in 1972 and Viipuri (at that time already part of the Soviet Union) abandoned them in 1957. A ferry line connects in 15 minutes the Helsinki Market Square (Kauppatori) to the Suomenlinna Fortress (Iso Mustasaari). The ferries run from 6:20 a.m. to 2:00 a.m. with two or three departures per hour in season.

The Helsinki Metro as its shown in Helsinki transports map, opened in 1982, was the first, and so far the only, subway-system in all of Finland. For the first 16 years of its existence, the line was topologically only one straight line, but in 1998 a fork with three stations each was added at the eastern end of the line. In 2006 the construction of the long debated extension of the subway system west into Espoo was approved in Espoo City Council, and serious debate about an eastern extension into Sipoo has taken place. To cope with the rising usage the Helsinki Metro is also planned to be further automated by 2010, allowing trains to run without drivers and therefore be able to run on shorter time-intervals in between trains. Trains depart from the Central Railway Station and Pasila to destinations across Finland. Pendolinos offer higher speed (220 km/h) connections to major cities, as do Intercity and Intercity2 trains at slightly slower speeds, and regional and suburban trains cover all of the YTV region and smaller cities as far north as Riihimäki and Lahti, and as far west as Karjaa. A tunnel has been proposed to connect Helsinki with Tallinn, though the proposal is still in the investigation phase. Kehärata, a project to connect Helsinki-Vantaa Airport with the national rail network and down town Helsinki, has been approved and construction should be completed by 2013.

Helsinki City Transport or HKL (Finnish: Helsingin kaupungin liikennelaitos, Swedish: Helsingfors stads trafikverk, abbreviated HST) is the official city-owned public transport company in Helsinki, Finland as its mentioned in Helsinki transports map. It operates the Helsinki metro, Helsinki tram and ferry boat traffic. Its bus operations were merged with another city-owned company, Suomen Turistiauto, to form a new bus company called Helsingin Bussiliikenne. Until the beginning January 2010, HKL was responsible for planning and organising all public transport in Helsinki. After that date Helsingin seudun liikenne (HSL) took over these responsibilities. The mission of Helsinki City Transport is to enable equal mobility for all and to create the preconditions for a well-functioning and vital city. 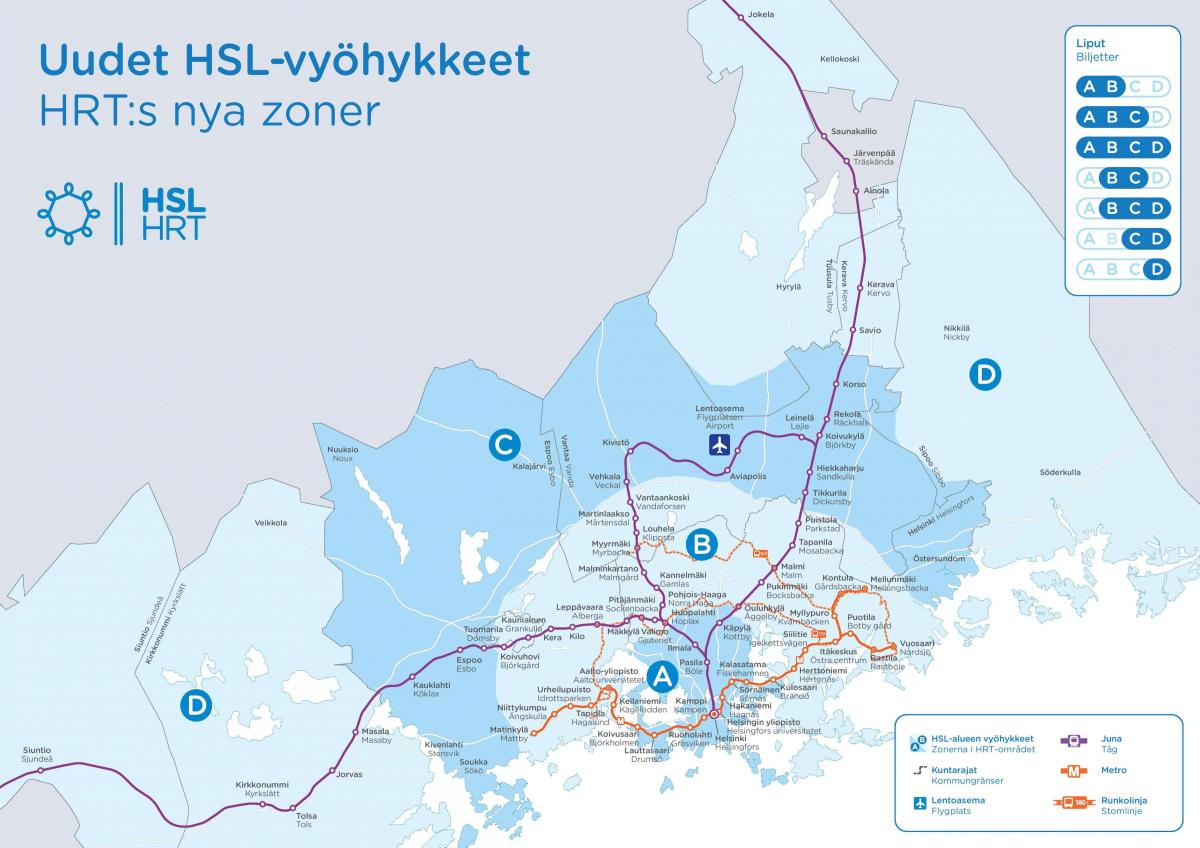 The public transportation system has three zones as you can see in Helsinki zone map: internal, regional (two zones) and the whole region (three zones). Internal covers a single city and regional the Helsinki metropolitan area. The whole region covers the Helsinki metropolitan area and additionally Kerava and Kirkkonummi municipalities. The different areas are symbolised by different colours: Blue signifies Helsinki, green signifies Espoo and Kauniainen, red signifies Vantaa and purple signifies the entire metropolitan area. Helsinki Card holders can travel free of charge on public transportation depending on their card within zones A/ B or A/B/C.