You can find on this page the Helsinki topographic map to print and to download in PDF. The Helsinki elevation map present the topography, river and relief of Helsinki in Uusimaa - Finland.
Helsinki lies in the far south of the country, on a peninsula that is fringed by fine natural harbours and that protrudes into the Gulf of Finland (see Helsinki topographic map). It is the most northerly of continental European capitals. 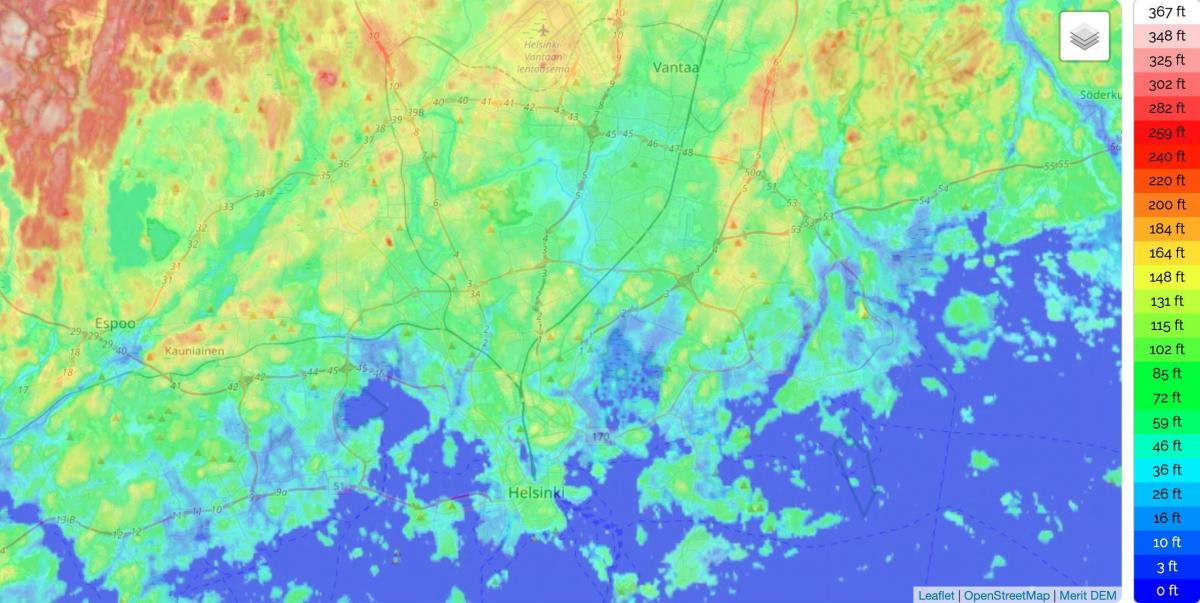 Helsinki is geographically situated on the southern peninsula by the Gulf of Finland. Facing Tallinn (Estonia) across the bay, a number of islands, which are part of Helsinki, can be reached via boats and ferries. North of Helsinki leads to other cities in Finland and connects to the borders of Sweden and Russia. Helsinki is located at 60.1699° N, 24.9384° E, at an elevation of 56'. Elevation above sea level: 26 m = 85 ft as you can see in Helsinki elevation map.

The highest elevation point in Helsinki lies in staggering 91m above sea level: on top of Malminkartanonhuippu hill located in Malminkartano. Adjacent to one of Vantaa rougher neighbourhoods, Myyrmäki. Malminkartanonhuippu as its shown in Helsinki elevation map is an artificial hill that has "grown" throughout the years as the area was beeing used as a municipal landfill site in 1976-96. Now the hill is a popular recreational- and exercise area, partly because of its stairs with 426 steps.

The whole metropolitan region of Helsinki encompasses also the adjacent cities of Espoo, Kauniainen and Vantaa bringing the total amount of inhabitants to about 1.1 million, its elevation is about 56. The total area of Helsinki is 214.25 square kilometres. It is a patchwork of urban culture, silent nature, a beautiful archipelago and attractive urban zones. Moving around the city is effortless as distances are short. Nearly 40 per cent of Helsinki land area consists of green space managed by the city as its mentioned in Helsinki elevation map.