You can find on this page the Helsinki trains map to print and to download in PDF. The Helsinki trains map presents the rail network and railway stations of the trains of Helsinki in Uusimaa - Finland.
Within the municipalities of Espoo, Helsinki, Kauniainen, Kerava, Kirkkonummi , and Vantaa , the system uses tickets that are interchangeable with the bus, metro and tram networks managed by the Helsinki Region Transport , which was formed in 2010 by merging transport section of Helsinki Metropolitan Area Council and Helsinki City Transport (see Helsinki train map). 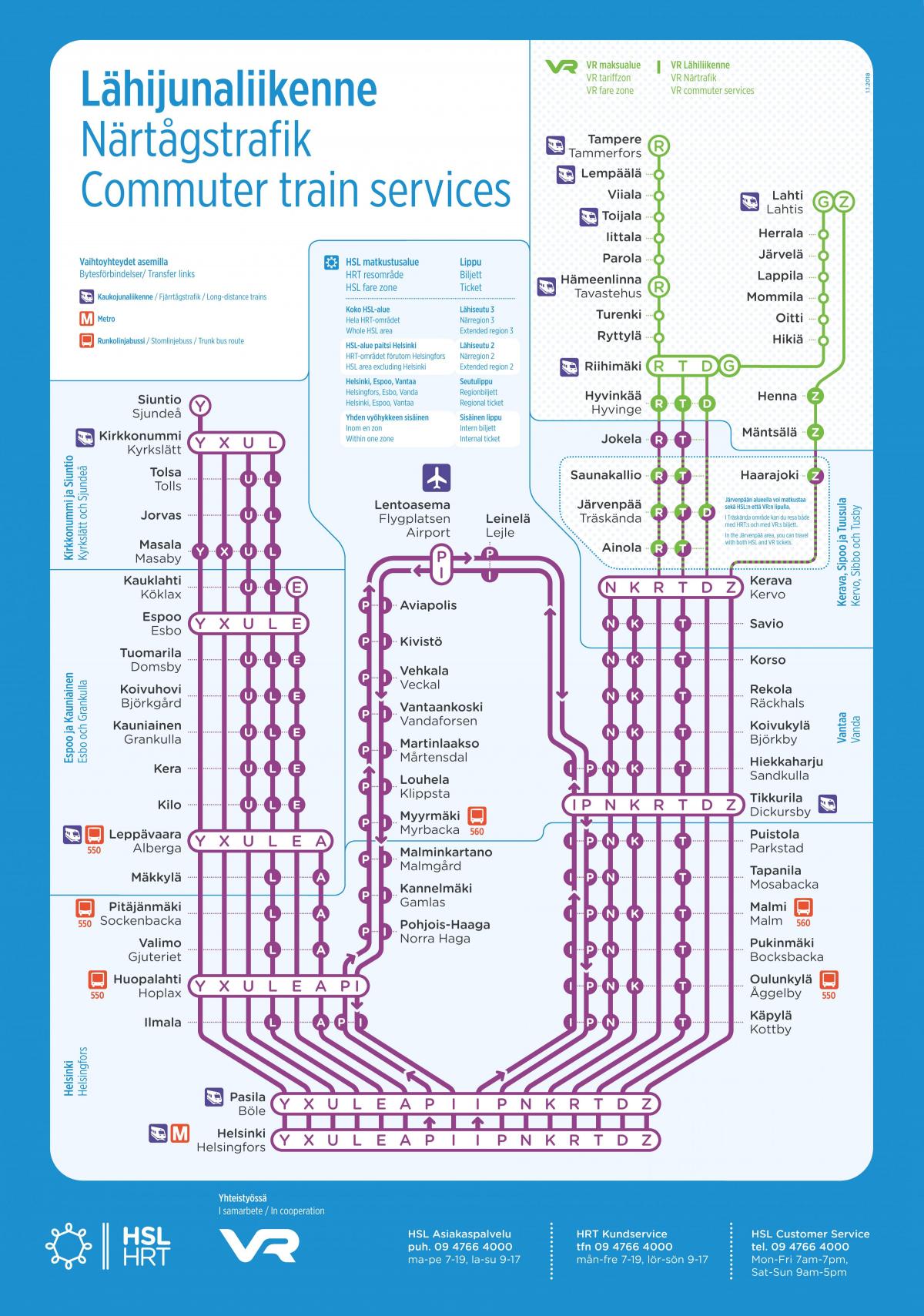 Helsinki commuter rail ( Finnish : Pääkaupunkiseudun lähiliikenne, Swedish : Huvudstadsregionens närtrafik , proper translation Capital local traffic ) is the commuter rail system serving Greater Helsinki, Finland as you can see in Helsinki rail map. The network is operated by VR , the Finnish national railway company. Together with the Helsinki Metro and trams, the network forms the heart of Helsinki public transportation infrastructure. Traveling beyond Kerava and Kirkkonummi uses VR commuter tickets, which are sold in zones from A (Helsinki) to H (Lahti). The Helsinki City Rail Loop would feature an underground, drop-shaped railway starting just south of Pasila railway station and coming back from tunnel at almost same location after traveling in a loop around under Helsinki city center. There would be three underground stations at Hakaniemi metro station , the Central railway station and Opera House . The extension is expensive and not likely to be completed before 2020.

The Helsinki rail network is composed of 14 separate services, pictured in the network Helsinki rail map. They operate on all four branches of the railway lines that begin at the Helsinki Central railway station , which is where they all terminate. The system has a total of 54 stations, 14 of which are within the city of Helsinki . There are about 850 departures on weekdays. A new Ring Rail Line is under construction and slated for completion in August 2014. It will extend the Vantaankoski branch via Aviapolis and Helsinki-Vantaa airport to the Main Line just north of Tikkurila station. The extension is drafted to introduce five new stations with reservations for three more. Unlike other tracks, a section of Ring Line beneath the airport will run in tunnel with tunnel stations for the airport and Aviapolis. Planning and construction of Ring Line has been realized so that it will be possible to construct a branch line to Klaukkala in the future.