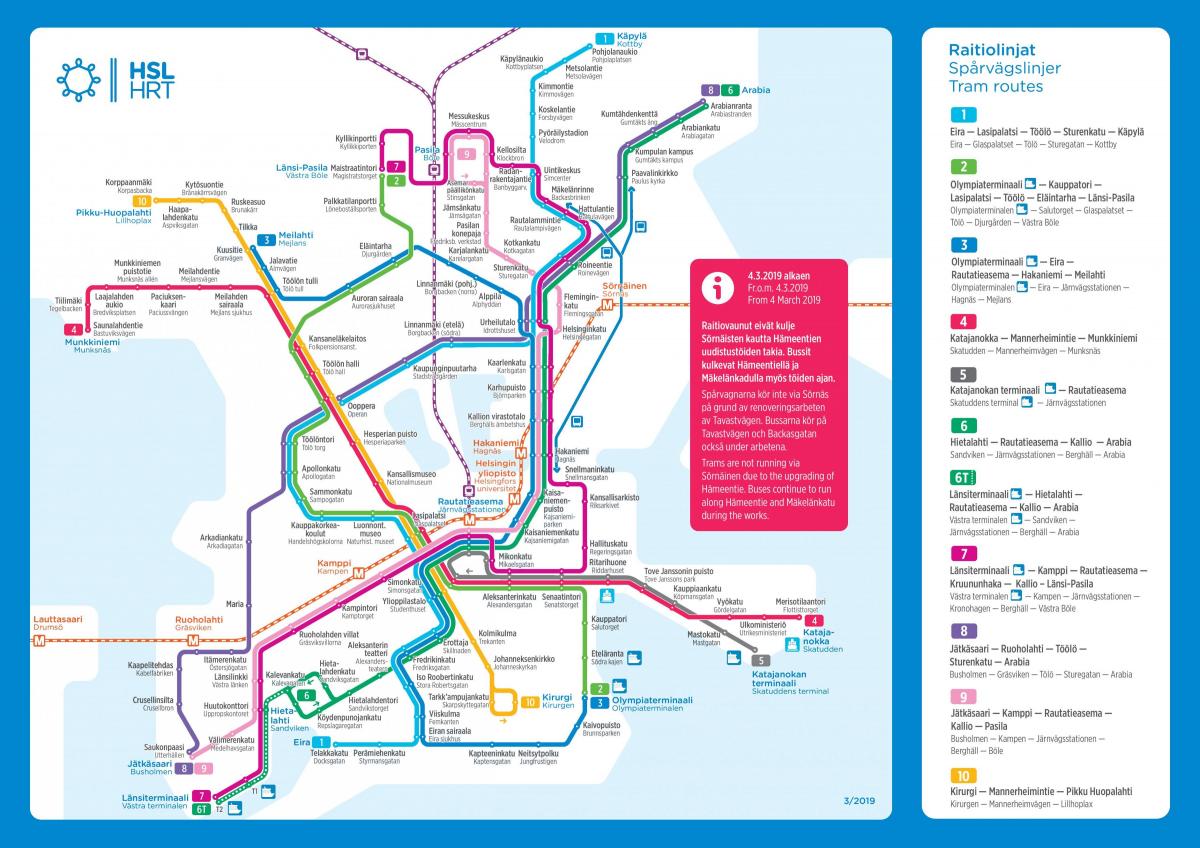 The Helsinki system is one of the oldest electrified tramway networks in the world. Since 1999, new low-floor trams have been gradually brought into operation, but technical difficulties have slowed this progress. In 2004, Helsinki City Transport bought old eight-axle trams from Germany for relief during this transitional phase. 54.9 million trips were made in 2009. There are 12 tramway lines in operation as of 30 March 2009 as you can see in Helsinki tramway map. Also included in the map below are two special lines operated during the summer months: The museum line operated by Helsinki City Transport in collaboration with Oy Stadin Ratikat Ab and the Spårakoff pub tram. The details for these lines are valid as of 2011; please note these lines do not appear in the route map included with this article.

In June 2012, Helsinki tramway line 9 will be extended to Jätkäsaari as its shown in Helsinki tramway map. The current southern terminus of the line at Kolmikulma will be abandoned in favour of routing the line to the Länsiterminaali ferry terminal via Kamppi. Helsinki Regional Transport Authority is reportedly planning to rebrand lines 3B and 3T from June 2012 onwards, with line 3B becoming line 3 and line 3T becoming line 2. The tramway network is built almost exclusively on the streets of Helsinki, making it a traditional tramway system rather than a light rail one. The track gauge is one metre. The network consists almost entirely of double track. In some parts the tracks are separated from other road traffic; elsewhere they share road space with cars and buses.

Helsinki tramways map are powered with electricity conveyed by overhead wires. Trams have their own traffic lights, distinguished from normal lights in that they are based on symbols of single colour as its mentioned in Helsinki tramway map: an upward-pointing arrow signifies "go", a horizontal line "prepare to stop" and the letter S "stop". The traffic lights are synchronised to allow tram and bus traffic to flow relatively smoothly. This system is called HeLMi (Helsinki Public Transport Signal Priority and Passenger Information). Helsinki City Transport operates the tramway network with a total of 132 trams in scheduled passenger service. In addition there are six trams in reserve and eight in charter use. The Valmet Nr I+, Valmet Nr II+ and Variotram series comprise the backbone of the fleet. Both Finnish- and German-made vehicles are in use.